Education and Mobility in Latin America (and in the Bronx)    Pptx  Great Gatsby Curve?

Puerto Rico is only “advanced” or high income Latin American Economy. Chile and Panama are the next highest with about 35% of U.S. GDP per person.  This was not always the case.  In 1960 Puerto Rico was 4th among Latin American  (see Figures PR-4 and PR-5 below).

Early estimates of the Hurricane Maria’s death toll (an indicator of FEMA’s efficacy) were very low, 68.  However a series of studies by Puerto Rico’s health department as well as Harvard and GWU now put the death toll in the thousands, the new official estimate is over 2900, comparable to the 9-11 WTC attack.   Here is the Wash Post OpEd by GWU researcher Lynn Goldman  (“We calculated the deaths from Hurricane Maria. Politics played no role” WP Sept 15th 2018). Dr Goldman is the Michael and Lori Milken Dean of  the Milken Institute School of Public Health**

Hurricane Maria devastated its vulnerable electrical grid run by  PREPA (see Frontline’s “Blackout”).   Is Puerto Rico the only U.S. population center below the Tropic of Cancer (Guam, Hawaii)?  Puerto Rico after Maria: A year of disruption

Naomi Klein wants to see more farms and solar power in Puerto Rico, but does not like the ides of making a Puerto Rico a Crypto Utopia (see this NY Times article)

New York and Mexico sent very much needed linemen (who may  be women).  Why did they step up to help in Puerto Rico?   Until 1913 Puerto Rico had a Central Bank and its own currency, then what happened? (just in PR or thoughout the U.S.?)  What populist President opposed a Central Bank?

Please read Chapter 1 of A&L pages 3-14 (especially Figure 1.1) and 20-33 (if you have time) better and more visual please skim this 5 page magazine article and this USA Today article.

An NPR Planet Money special on the Jones Act (from 2014)

Puerto Rico is Latin American “commonwealth” not its own country, a territory of the United Sates.  Spanish is the Island’s official language, Puerto Ricans are a very influential Hispanic group in New York and Florida.  What share of Puerto Ricans now live in the U.S.? Many born in Puerto Rico consider themselves immigrants, though technically they are not.   However, Puerto Rico remains a territory of the Unites States.  It is not a country as defined by the UN or Bretton Woods organization (any more than New York is county).  Recently Puerto Ricans voted to become the 51st state, 93% voted in favor of this idea, but only 23% of the population voted (perhaps because it was an unofficial referendum). During the 1960s and 1970s there was an active political movement for Puerto Rican Independence (President Obama pardoned one of its leaders leading to controversy at the most recent Puerto Rican day parade).  This may be the reason several agencies publish data on Puerto Rico (see the WB Doing Business indicators for example). More recently however it seems but breakaway sentiment has ebbed.  Like Greece however, Puerto Rico has a large debt and like Ecuador, El Salvador and Panama it does not have its own currency.  Some tax and labor market policies are local, PR has its own minimum wage for example (what is it? under $7/hour if I recall). The major difference between Puerto Rico and most LatAm countries are that workers are free to migrate to the United States.   At 29% of mainland income per person, in 1960 Puerto Rico’s income per person was about the same as Mexico (31% of U.S. levels) and Chile (27%), see Figure Pr-5 below 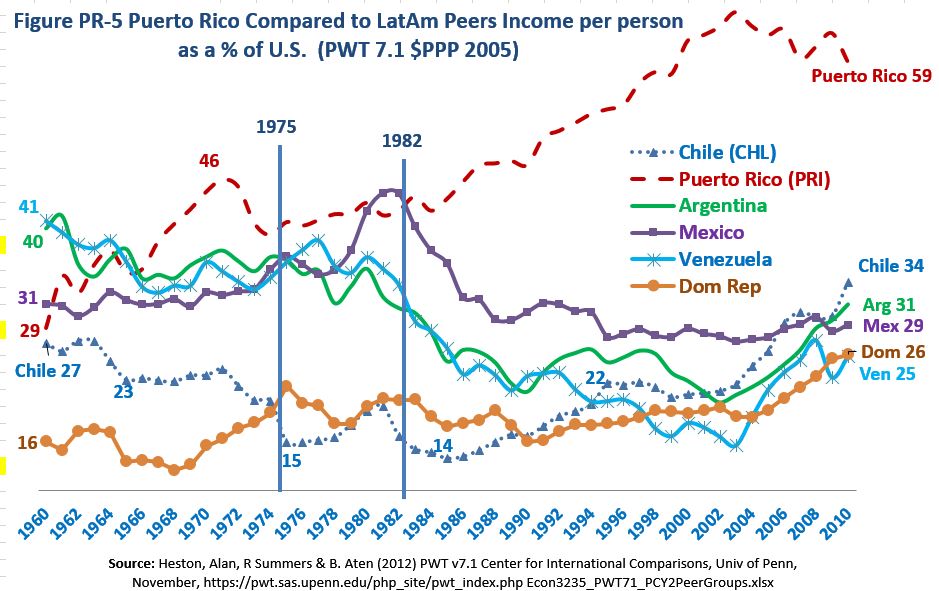 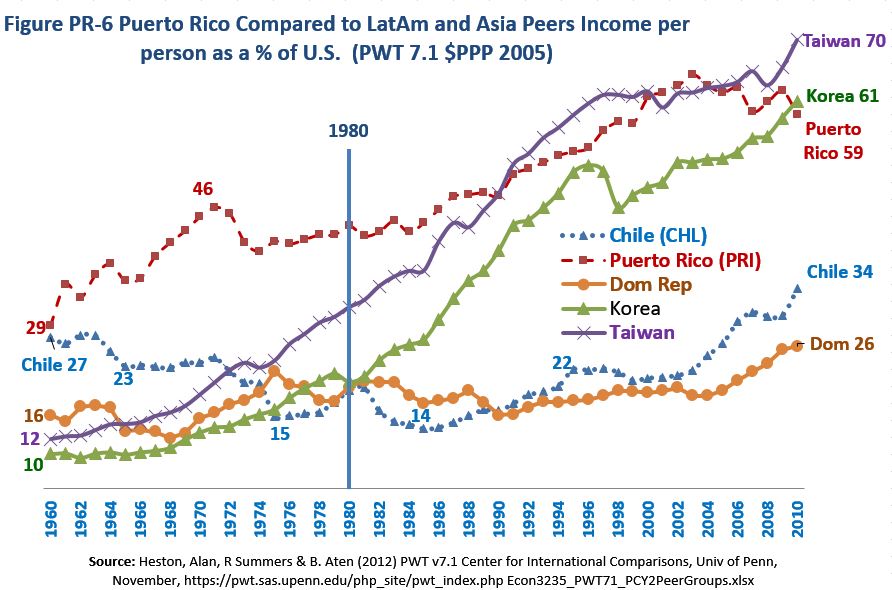 *Congratulations to Fordham’s Campus Ministry for meeting its of goal $30,000 for Mexico Earthquake and Puerto Rico Maria relief.

**who is Michael Milken?  What was his financial innovation (he says).  Who prosecuted him and who sentenced him, how long was he in prison?  Why is this cast of characters still relevant to us (apart from the GWU study now adopted as Maria’s official death toll in Puerto Rico)

US Multinationals in Puerto Rico and the Repeal of Section 936 Tax Exemption for U.S. Corporations  http://www.nber.org/papers/w23681?sy=681

Puerto Rico, the Commonwealth Island and unincorporated territory of the United States, was placed under a fiscal Oversight Board by the U.S. Congress in 2016. Unable to pay $72 billion it owes to bond holders, Puerto Rico’s Government and the Oversight Board filed for court proceedings under Title III of the Puerto Rico Oversight, Management and Economic Stability Act, similar to Chapter 9 of the US Bankruptcy code. The origins of the crisis in Puerto Rico have been attributed in part to the phase out of the IRS Section 936 tax exemption program for U.S. corporations from 1995 to 2005 and its elimination in January 2006. Using industry panel data, compiled from the IRS Statistics of Income for U.S. Possessions Corporations, the U.S. Economic Census for Outlying Areas, and the mainland U.S. Economic Census, we analyze the effects of the phase out and elimination of Section 936 on the number of establishments, value added, employment, and wages in Puerto Rico’s manufacturing. Our results show the elimination of Section 936 had the effect of decreasing average manufacturing wages by 16.7%, and decreasing the number of manufacturing establishments by 18.7% to 28.0%

Despacito has almost 4.5 views (up from up from 3.7 billion in September 2017) compared to just 2.9B for Gangnam Style this is very symbolic as Korea and other Asian countries have left overtaken LatAm countries (and Puerto Rico)  economically (Figure PR-6).  Recall the argument of A&L, 2017 regarding why Latin America “unilaterally” liberalized in the 1980s (fortunately PR is prevented from blocking trade by the constitution, unfortunately it got stuck with the Jones Act, which raises the price of almost everything on the Island).

15 of the Most Viewed YouTube Videos of all Time

What is SNAP?  What is NAP (in Puerto Rico) Examination of Cash Nutrition Assistance Program Benefits in Puerto Rico